Since this year, Obvius has a ladder competition using 'Clubladder'. The competition runs from October 17th 2022 until March 26th 2023 and will consist of 9 playing rounds. You can sign up here for the competition. Currently, there is 1 singles ladder for all playing levels.

The competition works as follows; you can sign up for the ladder and specify how often and when you can play a match. Clubladder then assigns you an opponent that is close to you on the ladder. You will receive an e-mail of this after which you can contact your opponent to plan the match. After the match you can enter the score on the Clubladder website. If you win the match, you will climb the ladder and when you lose you will descend.

You can decide on the duration of the match with your opponent. The match will be decided by the amount of games won.

The ladder competition is in full swing. This time there were again many exciting games played, but there were also some easy ones. For example, there have been several matches where one person has not been able to win a game. A number of players have moved up another rung and for some it is unfortunately finished. The former number 1, Lucas Lemson, was unfortunately already eliminated by Mathijs Kop (3), but also he does not last until the end and lost his match against Jippe van Daalen (4) in 7-12. Curious if he will make it till the end. This and all the results of the Singles Tennis Round 3: 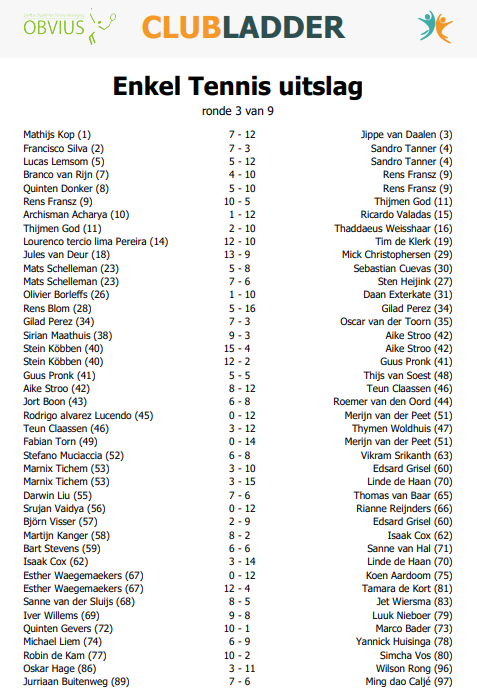